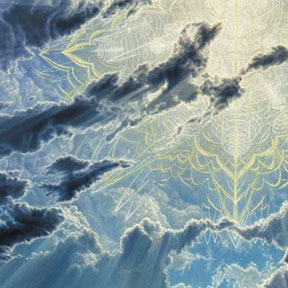 From my earliest days of exploring painting as a child, I felt compelled to experiment with the subtle worlds of depth, lighting, mood and atmosphere, and naturally gravitated toward the surreal. I also became engrossed with Nature, specifically the world of insects, and was fascinated by their alien beauty and how their streamlined and functional bodies came in such a vast variety of shapes, colors and textures. From there came an interest in evolution, and in processes in general; the elegant reality of how form and function can converge into naturally occurring art. This understanding became the core of what I built my artistic style around.

Then came the adult reality of making a living as an artist; again, the function determines the form: In my late teens I spent a few years doing album covers for punk and metal bands, where the aim was to make a strong statement in a visually impacting way; in the years since then I've done tons and tons of tattoos, working with the flowing human form on a large scale and catering to the tastes and needs of the human canvas. So even when I am free to paint on my own for my personal gratification, these functional influences loom large in everything I do.

For the most part, my work is intended not to tell a story, but to elicit a response. On the surface, my goals are simple: I want to make works that are visually beautiful and intriguing, just to get the viewer's attention. From there, I hope to establish a presence in their imagination that acts as a key, allowing them to visualize whole new visionary realms. All art does this to some extent, so I take this responsibility seriously and aim to provide new templates of places that are enjoyable to imagine.